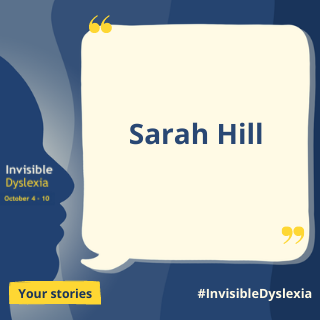 I struggled at school, and was told around aged 7 that I was dyslexic, however offered no testing and no support. It was commonly accepted that I was.

At secondary school I dropped down the sets and was told I was expected to preform poorly at GCSE. I knew stuff but struggled to write down. In my mock GCSE (where I was expected to get a D), I got A* and I was asked if I cheated etc. but then put in to see the education psych who send 'yes, very dyslexic' and offered extra time in exams. Obviously as course work had been submitted there was no help here. Because I didn't have anything in writing, I was reassessed at university, this time receiving a written report with a formal diagnosis.

Positives - I can see the finer details. Because I have to re-read reports etc. I find things others have easily missed.

Negative - After my early years being told I was stupid, even a baby could spell that, my confidence and self-beliefe were badly affected, For many years I had low self-esteem. This is better now because I work in areas where I try to use words as little as possible, and have gained success in my career, however I'm still embarrassed to tell people that I am dyslexic as it is little understood. The first responses are 'oh you can't read', or spell etc.

If I'm honest none. I was allowed extra time in exams, and at university access to a PC. But because although it was known and accepted, as I didn't receive a diagnosis until 16, I was given no support.

As an adult I can ask others to read through important documents, or ask for extra time in a meeting to read a document, but in general people seem to think once you leave education you are no longer dyslexic, or that yes I can't fasten my shoe laces, but no it's not a joke to laugh at.

As I got older, I realised that I was very good with numbers. My dyslexia allowed me to see patterns easily, to spot errors etc. Due to this I have been able to have a successful career in data within healthcare. I feel that I am able to make a difference to others.

Don't be embarrassed to say you are dyslexic. It doesn't mean you are not intelligent, but that this is shown in different ways (e.g. orally) to others. Embrace your strengths.

Dyslexia just means a signal in the brain isn't quite getting a-b, mixing letters up etc.

It is not a sign of low intelligence, just that instead of writing I am better delivering orally.