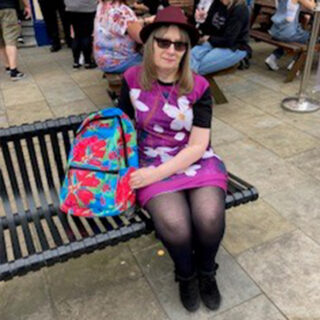 My parents realised that I had a problem with reading and writing when I was about seven or eight as my sister was well in advance of me. I was getting very frustrated, to the extent of throwing books across the room as I just could not understand what was in front of me.

My mum, in desperation, took me to the doctors. Luckily for me, because this was in the 1960's and dyslexia wasn't a term used back then, they suggested some help. This was to see a lady who gave elocution lessons, but had a reputation of being able to help children with reading difficulties. Initially she taught both my sister and I, and then just myself.

She unlocked all the words, which I hadn't been able to see, and from not being able to read at all, I was able to read everything. This meant I went to senior school, and I could read. I still had major issues with spelling, but it was a huge step forward. I also lacked understanding of grammar.

Like a lot of people with dyslexia, I'm also bright. This meant academically I was often put in the top classes but struggled with the written aspect of the work, particularly exams. Once I learnt about dyslexia it dawned on me that I probably was dyslexic. It wasn't until I decided to take further education and had an opportunity to be tested at the University that the diagnosis of dyslexia was given.

I live with dyslexia every day. I had far more challenges when I was younger than I do now. There are a lot of preconceived views on dyslexia, and a lack of understanding of the condition by others. I've never felt able to tell a potential employer until now that I have dyslexia.

Dyslexia has given me the ability to think outside the box because you're always having to think of alternatives when dealing with things like writing. This means I'm very tenacious, and I always go and look for other solutions.

The first support I received for my dyslexia was from the lady who taught elocution. Part of my dyslexia is a problem with hearing how a word breaks down and she was actually able to help me with that.

It's been a revelation for me the technology that is now available. I am dictating using Dragon the words you read here. I also use proofing technology of Read & Write Gold. I see things that are actually not there or are different. which means I superimpose onto what I have written; things are actually are not there or are different. I only see the words correctly if they are spoken out to me.

Microsoft also now has technology built in that enables dictation and to read text. I think this will be a game changer for a lot of people with dyslexia. I now know that I have technology available to me that means I am no longer scared to say I have dyslexia because these tools enable me to do my work as easily as anyone else.

Just being able to publicly say that I have dyslexia is a huge achievement. I have suffered discrimination and a lack of understanding in some roles I've had. It makes a world of difference to my confidence that I can now say, this is me, yes I have dyslexia, but that's not an issue as long as I've got all the supporting technology and I'm good at my job. It's never stopped me from doing things including getting post graduate qualifications which I'm really proud of.

Find supporting technology, it's out there and use everything you can to make yourself understood.

Being someone with dyslexia is a gift. I didn't realise it at the time, but I know now it has shaped me.